Miele is Changing the Game: Introducing the Miele Dialog Oven

Miele is changing the cooking game once again. As a part of their ongoing commitment to innovation and being a leader in the appliance industry, Miele recently introduced the Dialog oven. The fact that it was revealed at the IFA 2017 conference in Berlin, which is a platform for companies to reveal the latest and greatest technology, was no mistake. It’s not hyperbole when we say that the Miele Dialog oven may change how we all cook one day. 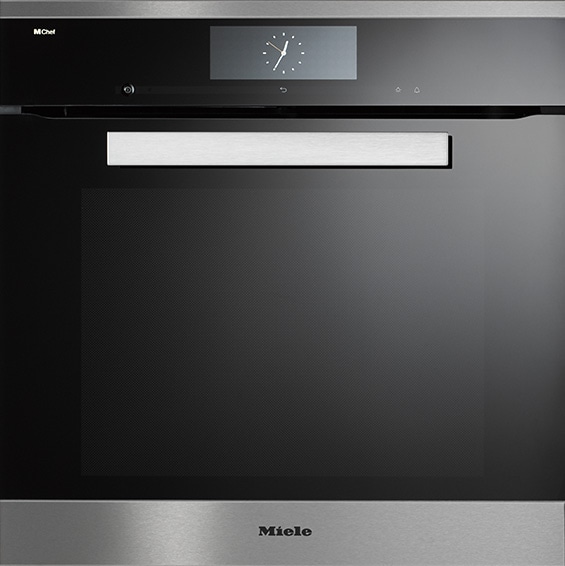 What is the Miele Dialog Oven?

So now you’re probably wondering, “What makes this Dialog oven so special?” Well, its innovative technology allows for a new method of cooking. While conventional ovens cook using heat from the outside in, the Dialog oven cooks dishes in their entirety. This cooks all parts of the food uniformly, making excessive browning a worry of the past. Miele illustrated this during its IFA 2017 presentation, by cooking fish in a block of ice (w/o the ice melting!) and veal in beeswax, both to perfection. Take a look at when the cooked veal was revealed to the audience (courtesy of DIY Network/HGTV’s Matt Muenster Instagram):

Veal tenderloin cooked in beeswax. Because, you would if you could. #dialogoven @mieleusa

It doesn’t stop there. The Dialog oven is able to prepare different dishes and ingredients simultaneously. This was also demonstrated at Miele’s presentation in Berlin, aptly described by Kitchen & Bath Business:

While few consumers will find the resources to cook in ice, another example of the oven’s capabilities involved a traditional German meal of veal, vegetables and potatoes. Instead of preparing each of these components separately and cooking them at different times or temperatures like in a conventional oven, all of the elements were placed inside of the Dialog Oven at the same time. After 30 minutes, the chefs removed the dish to reveal that the veal was evenly cooked through – a feat normally only possible with sous vide – and the vegetables and potatoes were cooked just enough and not overdone.

Now you’re left wondering how the Dialog oven is capable of such a feat. The answer: Radio frequencies. It operates like a microwave, except much smarter. The oven reads how much energy the food is absorbing and is able to make adjustments to the waves being used to cook the food. This ensures each dish or ingredient is cooked to its own ideal specifications.

While the Dialog oven is years away from making their way into homes in America, it certainly shows that the future of cooking is bright, thanks to Miele! For more details about this new oven, visit their website here.

DeserTech Appliance Service is proud to service Miele appliances in the Coachella Valley. Contact us here if in need of Miele repair.

By Lon Riddle|September 13th, 2017|Blog, Ovens/Stoves/Ranges|Comments Off on Miele is Changing the Game: Introducing the Miele Dialog Oven